↓ Skip to Main Content
Home › Articles by Sandeep › Humility, Kindness and Simplicity – A Tribute to My Father

Humility, Kindness and Simplicity – A Tribute to My Father

How do you capture eighty-one years of pure love, affection, compassion, and genuineness in any writing, any narrative? You simply can’t. What makes you who you are? How do you become who you actually become? Authenticity, humility, kindness, and simplicity were core to my father, my papa – Dr. Harendra Kishore Singh. We lost him to Covid-19 a month ago. It was a devastating loss. As I move through the days, I want to carry his memory with me. How do I want to remember him? How does everyone in our family remember him? There is no one tribute that will ever do justice to Papa. The best I can do is close my eyes and remember what makes perfection perfect.

Eleven years ago, for Papa’s seventieth birthday, I presented him with a special book. The book centered on his life story, delving into how he grew up and who he became – a thorough gentleman doctor, a devoted husband, and a perfect father. I interviewed him for several hours across multiple sessions and transcribed his life story in his own words for this very personal and exceptionally special pictorial book. Papa lost his father (my grandfather) when he was less than two years old in pre-independent India. My conversation with him captured not only his early memories of India’s freedom struggles but also his personal struggles. Our grandmother kept our large family together. Papa was the youngest of seven brothers and sisters. Even though he had several issues with his own health, he never wavered in his decision and deep conviction to become a medical doctor. In his own words, “I always wanted to serve the community, make everyone get better through whatever I knew because of my medical education, training, and experience in helping people.” Papa was a perfect go-to person for our entire family. Most importantly, he was an amazing listener to everyone: us, our extended family, friends, patients, and anyone who ever came in touch with him. Papa was a healer. 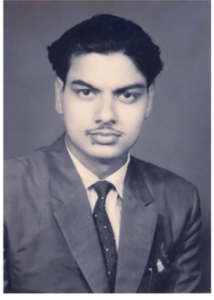 Papa was both very spiritual and deeply religious from the beginning. I remember him telling me during his early years in medical college, where he had a shared accommodation with two others, how he would get up pre-dawn to get ready and complete his daily meditation and prayers for approximately two hours every day. Our home in Patna, India is called Madhuban – Lord Sri Krishna’s abode. Papa and Ma have visited over two thousand temples in India, including all the Four Dhams, Twelve Jyotirlings, and other famous temples (several of them many times over). India is a land of temples, and Papa would not miss any opportunity to visit the temples and immerse himself in their serenity. Though he had traveled all over the country, Papa’s heart was always in Vrindavan – the most sacred place for Vaishnavas. One could see a special glow and exceptional joy on his face as soon as he would get to Vrindavan. Part of me thinks Papa was missing his time with Lord Sri Krishna so badly during these Covid-19 months that he decided to fully be with the Lord forever.

When I was five years old in 1971, my family moved to Patna from Ranchi. Although Ranchi is now the capital city for the state of Jharkhand, it was then a part of the state of Bihar, India. Papa had joined the coveted Patna Medical College & Hospital – PMCH (a Government of Bihar Medical Institution) in the Ophthalmology Department as Resident Surgical Officer. We got our residence at the PMCH campus itself. Papa would continue to serve the community through PMCH for the next twenty-nine years and retire as Professor and Head of the Department of Ophthalmology. For my two younger brothers and I, the PMCH campus would become our growing-up grounds. From the beginning, Papa was most particular about our education and insisted that math and science had to be strong cores for us. All three of us brothers went to SGD Patliputra High School until class ten and then to Patna Science College for Intermediate of Science (that’s what +2 was called then). Patliputra was a Hindi medium school, though very well-renowned locally for math and science. It didn’t matter to Papa that most other children on PMCH campus went to English medium schools. Later, when I went to join IIT Bombay in 1983, he came along with me to see me off at the IIT Bombay campus. He proudly called out that it was because of the strong foundation at these schools that I could get through the IIT entrance exams! 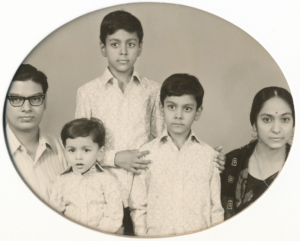 Our first family picture taken at a Patna studio, 1973

I remember calling Papa twenty years ago to let him know that the doctors at Stanford Hospital in California had diagnosed my wife, Sushma, with early onset Parkinson’s, and he in his most calm manner said, “Koi baat nahi, sab theek ho jayege.” (Don’t worry, everything will be alright). Papa’s ability to receive anyone in intense pain and calm them down with deep, genuine care and compassion was a unique quality of his. Later, he would become heavily involved in both medical diagnosis inputs and spiritual guidance to Sushma for numerous years. There was no one better than Papa to retain composure and positivity through each and every hurdle that our family faced. He helped Sushma and all of us in the family grow from an early state of denial thinking “no, this can’t be Parkinson’s” to coming to terms with the diagnosis and managing it over a very long twenty-plus year period that included numerous hospital visits across the U.S. and India as well as lengthy neurosurgeries at Stanford. He was always there.

Papa never told any of us three brothers what careers to choose. None of us became the doctor that he was. Still, he was very proud of our own achievements over all these years. He was also very proud of all of his six grandchildren. All of them are very close to both Ma and Papa. Papa was very happy when Shikha, our daughter, decided to pursue a career in medicine. She completed her undergraduate studies in Neuroscience from The Johns Hopkins University and will be joining The University of Pennsylvania in the Fall of 2021 to complete her MD. Papa was super excited and looked forward to attending Shikha’s white coat ceremony. Shikha also shares her surname with Papa. Ever since she decided to pursue medicine, I have always lovingly called her “Junior Dr. Singh” and Papa “Senior Dr. Singh.” I am sure wherever he is, Papa is happy to see one more doctor in the family.

Both Ma and Papa were looking forward to being with us last summer for our son Somu’s marriage to Khyati. They were engaged for four years prior and have known each other since their college days. Papa was very fond of both of them, and they adored him for who he was, a genuine grandfather full of love.  Somu was born in Patna, and as the first grandchild in our family, he also got special “advantages” from both Ma and Papa. Many years later, at our Fremont, California home, Papa would not miss a single opportunity to learn about the new iPhones, the apps and their features from Somu. Somu would gladly spend several hours explaining all of the details to his Baba. 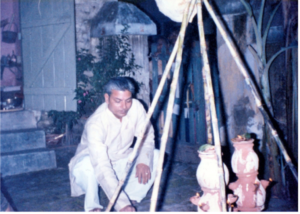 Papa’s favorite festival was the Chhath Puja, an intense annual festival that requires four days of fasting and takes place on the sixth day after Diwali. The Puja is dedicated to the Sun God and mostly celebrated in Bihar, Jharkhand, UP, and Eastern India, although it is now more global as folks from these regions have moved to other locations in India and abroad. Earlier, my grandmother would do the Chhath Puja, and so every year, we would religiously go to Muzaffarpur, Bihar to our ancestral home. Later, Ma started doing the Chhath Pujaherself. Ma has now been doing it for fifty years. Papa would always ensure that the arrangements were proper and complete. He would clean up the special puja area at our home that would be marked by Ma to have all the preparations done. Everyone in the family had their responsibilities cut out including getting the clay pot elephants, the six-foot-tall sugarcanes, and the special wheat to make thakua (a sweet made exclusively for the Chhath Puja). We would also go out and buy specially-made bamboo baskets, fruits, sweets, and more for the occasion.

I remember at the end of each day Papa would ask us all three brothers to come together at the Puja area and spend time with Ma while pressing her feet – in a very emotional and special way for us to learn the soulfulness of gratitude, sincerity, and family values. Papa would always be immaculately dressed in his kurta for this very special Chhath Puja each of the four days. He was always the best dressed among all of us.

Papa was special. My biggest regret is that I couldn’t see him and spend time with him in his last few days. Though he was always there for all of us all the time — each and every time — I couldn’t be near him while he was fighting all alone in the Covid-19 ward and the ICU. Godspeed, Papa. I know you are at a better place now. This Father’s Day and forever, I want to remember you for all the humility, kindness, and simplicity that defines you. These traits are not only your legacy but instill the foundational values of life that will always be core to us. 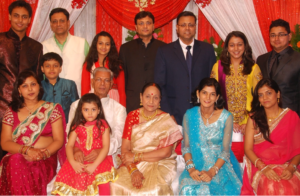